Being a mom has changed me almost as much as being a wife.

Here is my list of my favorite moments as a mother. A lot of them weren't my favorites in my overwhelmed and massively sleep deprived, mother of 5 kids in 4 years state ...but now that my kids are older and those days are behind us I can laugh. 🙂

Without further adieu...or adeiu or aduie. You know what I mean. 🙂

10. The time Caleb scooted across the bed at like 2 months and we called our parents and said he crawled.

9. The time we met a friend at McDonalds and didn't order any food (just drinks) while the kids played on the PlayPlace and Lilla came back to our table with ketchup on her face. Confused, I looked around the room to find a group of people laughing hysterically and pointing in our direction. She had apparently walked up to their table and helped herself to some fries.

8. The time Elisabeth made it to church with no diaper or panties on. I heard a commotion at the entrance and went to find out what it was and Elisabeth was standing with her head on the ground and her hiney in the air. With no diaper. And no panties.

7. The time I caught Elisabeth trick or treating when it wasn't halloween. And our neighbors gave her stuff.

6. The time I was 37 weeks pregnant with the twins, and went to Walmart and slipped in a puddle of urine. Nathaniel was still potty training and it was his. But it took me a while to figure it out. Still gross but at least it came from him and not a stranger! A tiny little elderly woman tried to help me up. Like a mouse helping an elephant.

5. The time I had to take all five kids out of church (there were actually a lot of times that this happened) and Lilla got away from me and started to run up the isle toward the front and I set all the other kids down and tried to catch her before she reached the front but I tripped and fell.

4. The time I had to take the twins out and Uriah wouldn't walk so I ended up literally dragging him to the back.

3. The time we went to a wedding and the floor of the church was concrete and slanted down toward the front. We let Caleb take ONE little car in. During the prayer he dropped the car...and it was loud ALL. THE. WAY. TO. THE. FRONT. and finally came to stop at the Mother of the Brides feet. We were sitting in the back. She was not happy.

2. The time I let my dad talk me into taking a road trip to CA when the twins were less than two weeks old. We all got pink eye. Even the babies.

1. The time we were in the McDonalds drive thru and Lilla climbed on top of the car. Uh huh. She did that. And many other things that could probably fill a book. Don't believe people when they tell you that girls are easier than boys. It totally depends on the personalities of both!

I am pretty sure that an army of angels has surrounded my kids throughout their lives. With all of the shenanigans we've only had to make one trip to the ER for stitches. 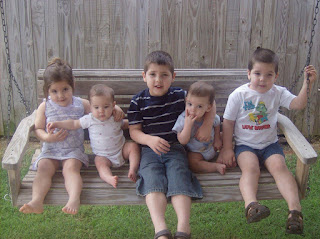